I pinned this recipe forever ago on Pinterest and finally made it!  It was absolutely delightful!It was very similar to My All-Time Favorite Brownie Recipe, with a few minor tweaks.The White Chocolate Buttercream Frosting was divine!It was seriously a slice of heaven in my book and I will definitely be making these beauties again real soon!The original recipe makes it for a 8×8, but I adapted it for a 9×13, because really, who doesn’t want a few more of these brownies?! haha! 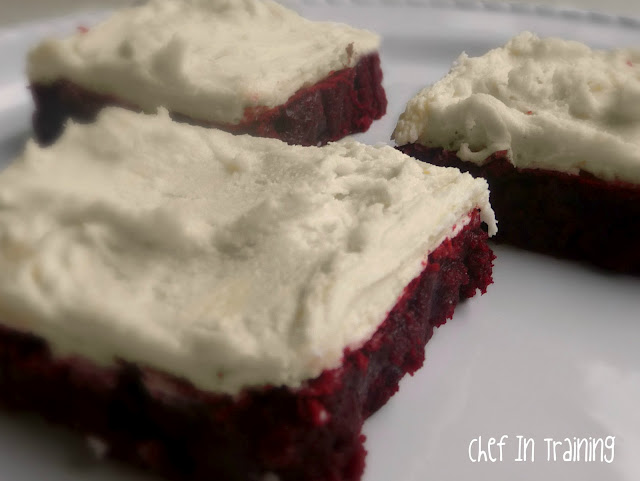 RED VELVET BROWNIES with WHITE CHOCOLATE BUTTERCREAM FROSTINGrecipe adapted from: Smells Like HomeFor the brownies:6 tbsp unsweetened cocoa powder2 oz red food coloring (this is two small bottles)4 tsp pure vanilla extract, divided1 cup (2 sticks) unsalted butter, at room temperature3 cups granulated sugar4 large eggs, at room temperature2 1/2 cups all-purpose flour1/2 tsp saltFor the white chocolate buttercream frosting:1/2 cup (8 tbsp) unsalted butter, at room temperature2 1/2 cups powdered sugar1 tsp pure vanilla extract4 oz good-quality white chocolate (not chips), melted – I recommend Callebaut1 – 2 tbsp heavy creamPreheat the oven to 350 degrees F.  Butter and flour an 9″x13″ baking pan.In a small bowl, slowly stir together the cocoa powder, food coloring, and 2 tsp vanilla into a thick paste until no lumps of cocoa remain. Set aside.In the bowl of a stand mixer fitted with the paddle attachment, beat together the butter and sugar on medium speed until light and fluffy, about 2 minutes.  Add eggs one at a time, mixing well after each addition, then stir in the remaining 2 tsp of vanilla.  With the mixer off, add in the cocoa mixture, then turn the mixer to medium and beat the two mixtures together until they are one uniform color.  Slowly add in the flour and salt and mix on medium-low speed, just until combined.  Do not overmix.Remove the bowl from the mixer and stir up the batter with a rubber spatula once or twice just to ensure all of the flour has incorporated from the sides of the bowl and there isn’t anything stuck on the bottom of the bowl.  You’ll want one uniformly colored (red) batter.Pour the batter into the prepared pan and bake for 26-30 minutes or until a toothpick comes out clean when inserted into the center of the brownies.  Allow brownies to completely cool in the pan on a baking rack, about 45-60 minutes.  Frost brownies and Enjoy!To make the frosting:In the bowl of a stand mixer fitted with the paddle attachment, cream butter until soft and fluffy then beat in the vanilla.  With the mixer on low speed, slowly add in powdered sugar 1/2 cup at a time; allow the sugar to mix in before adding the next 1/2 cup. Once all of the sugar has been added, beat on medium speed for 30 seconds and scrape down the sides of the bowl.  Add in the melted white chocolate and beat on medium speed until incorporated.  With the mixer on low, add in heavy cream 1 tbsp at a time and beat at medium speed until the frosting has reached your desired consistency.Enjoy! They are really delicious!Linking up to these parties and here